Want to become a better trader?

Volume delta is one of the best trading indicators you can use when trading order flow. It gives you an instant snapshot of the buying and selling pressure in a market.

After reading this post you will understand how volume delta provides a critical edge by allowing you to spot potential large reversals in the market. You will also learn how to use the cumulative delta indicator to manage your trading positions.

What is Volume Delta? 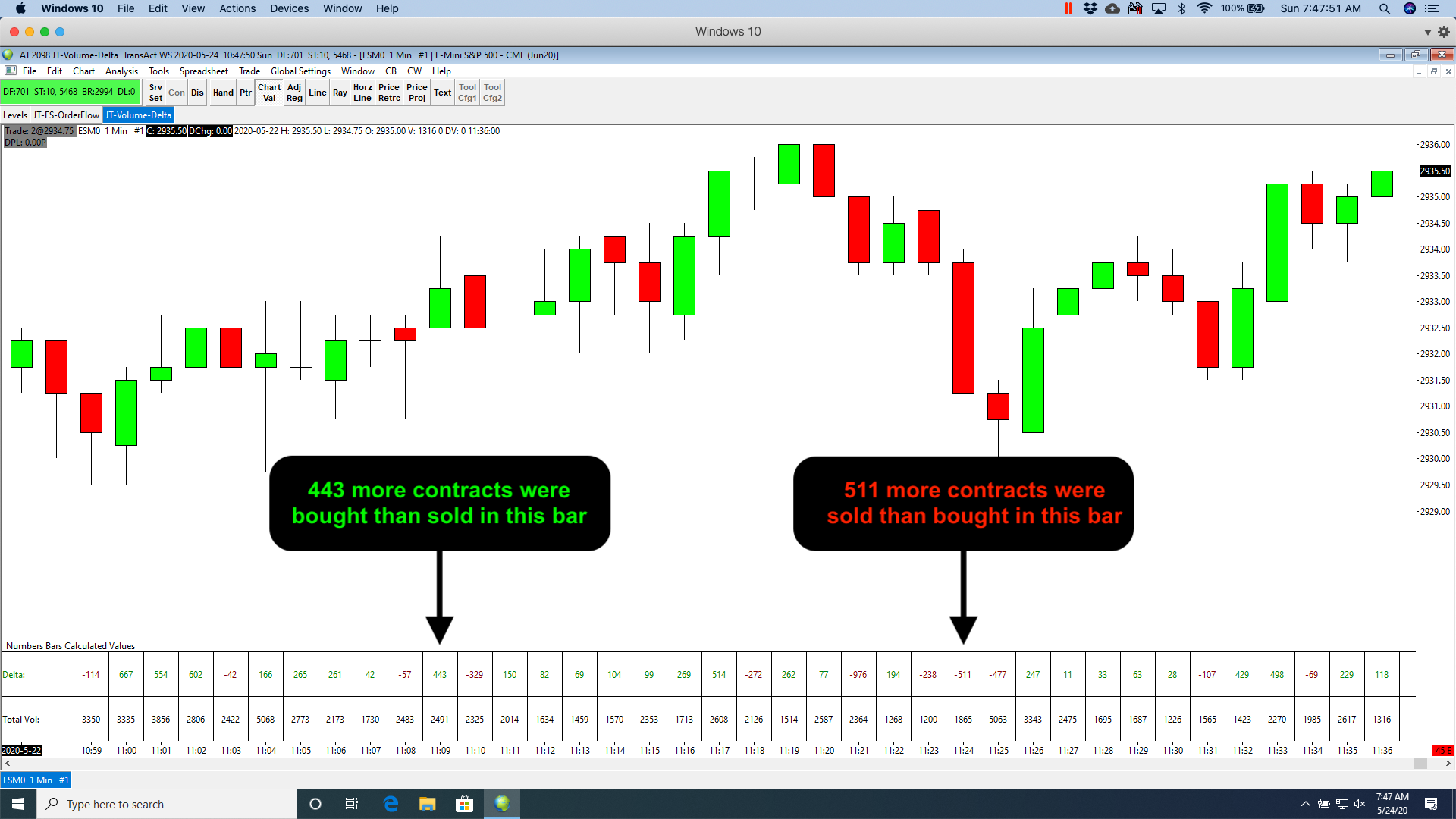 We use delta to understand the relationship between buying or selling pressure and price.

Let’s imagine a price bar that reached the low for the day but delta was actually positive and the bar closed higher than it opened.

Without looking at the chart below, would you be more inclined to do, go Long or Short?

If you said Long you were correct 🙂

Volume delta is a key metric to understand when making trading decisions based on volume and order flow. However, on its own it can be too much information to interpret quickly when trading in a volatile market.

As a trader, I like to view things visually at a glance… Introducing Cumulative Volume Delta. 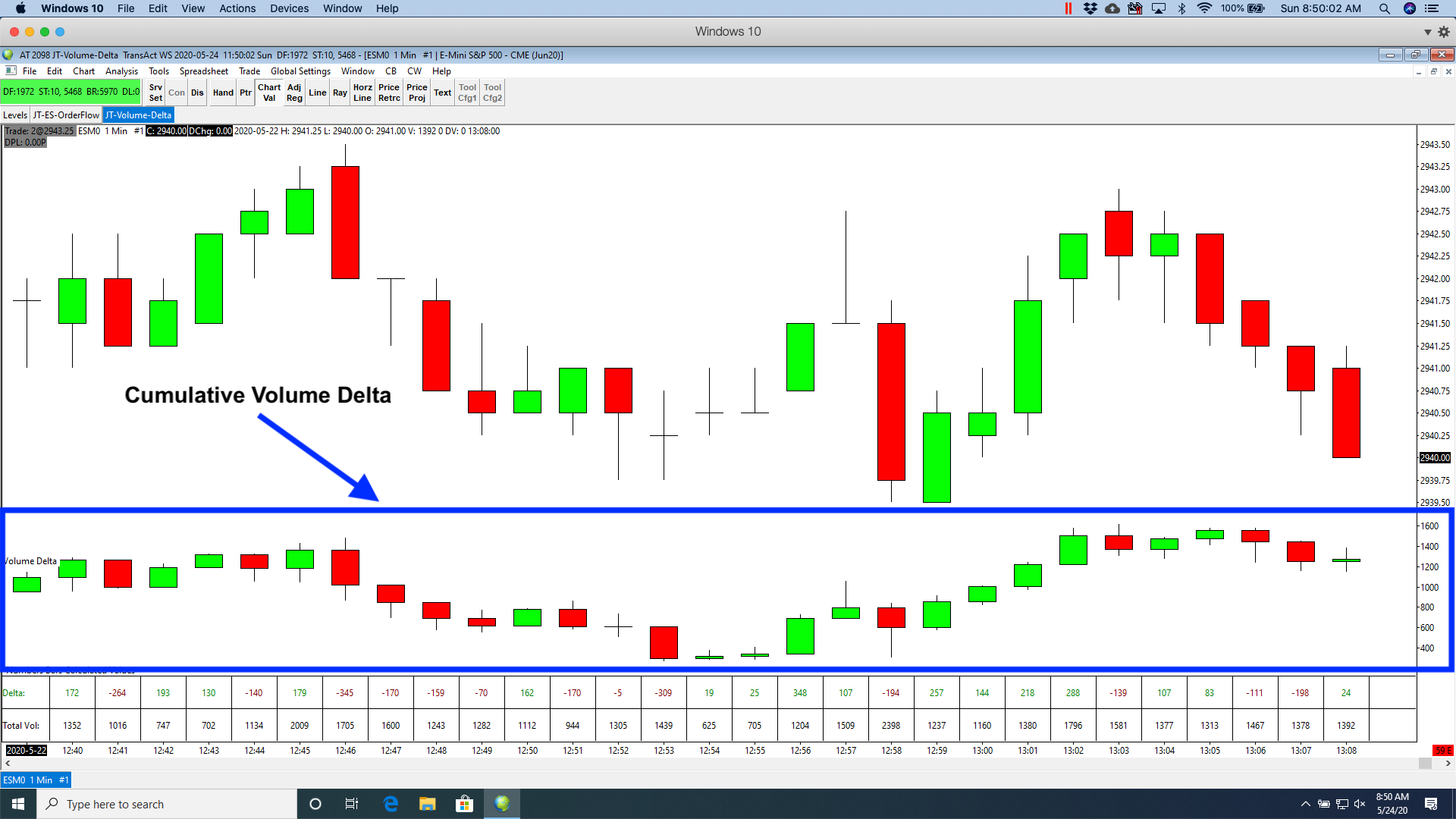 Cumulative volume delta takes the delta values for every bar and successively adds them together to visually provide a graph as seen above.

While volume delta is great for comparing delta bar to bar, cumulative volume delta is useful when determining buying or selling pressure at different price levels such as swing highs or lows.

Let’s do a quick recap on swing highs and swing lows.

A swing high (SH) forms when the high reached on a security is higher than price action around it. Once price moves above a prior swing high and begins to retrace a new swing high is formed.

A swing low (SL) forms when the low reached on a security is lower than price action around it. Once price moves below a prior swing low and begins to retrace a new swing low is formed.

When price is making higher highs followed by higher lows a market is considered to be in an uptrend.

When price is making lower lows followed by lower highs a market is considered to be in a downtrend.

When evaluating delta it’s extremely beneficial to compare delta values at swing lows or swing highs to determine the amount of selling or buying pressure and how the market is reacting.

The true power delta is revealed when we use it to determine the market’s reaction to powerful buying or selling. We want to see if the market has reacted as we would expect or not. 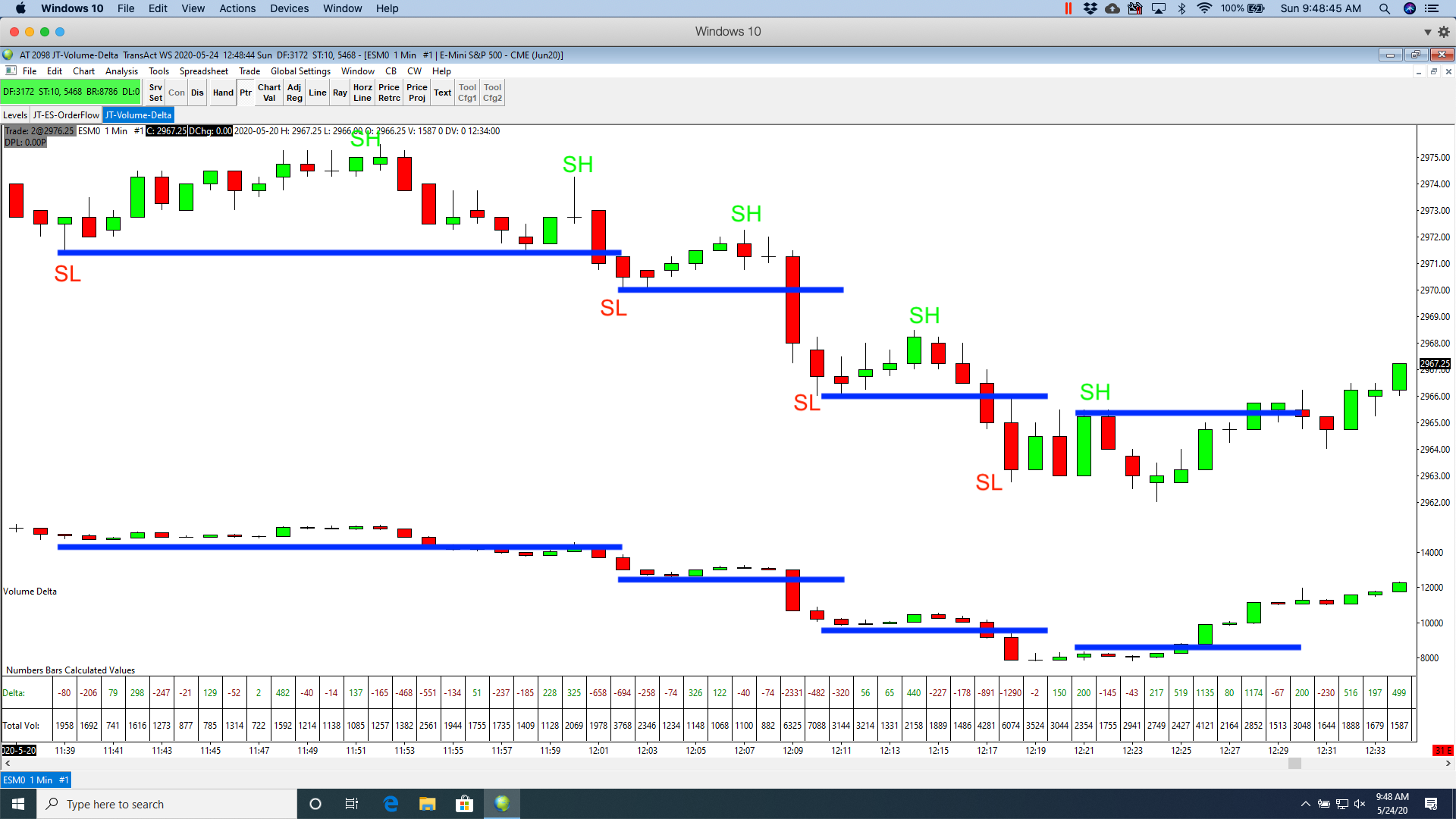 In the above example you will notice every time price breaks a swing low or swing high, delta does as well.

BUT….what’s occurring when this isn’t the case and we have divergence between price and delta? 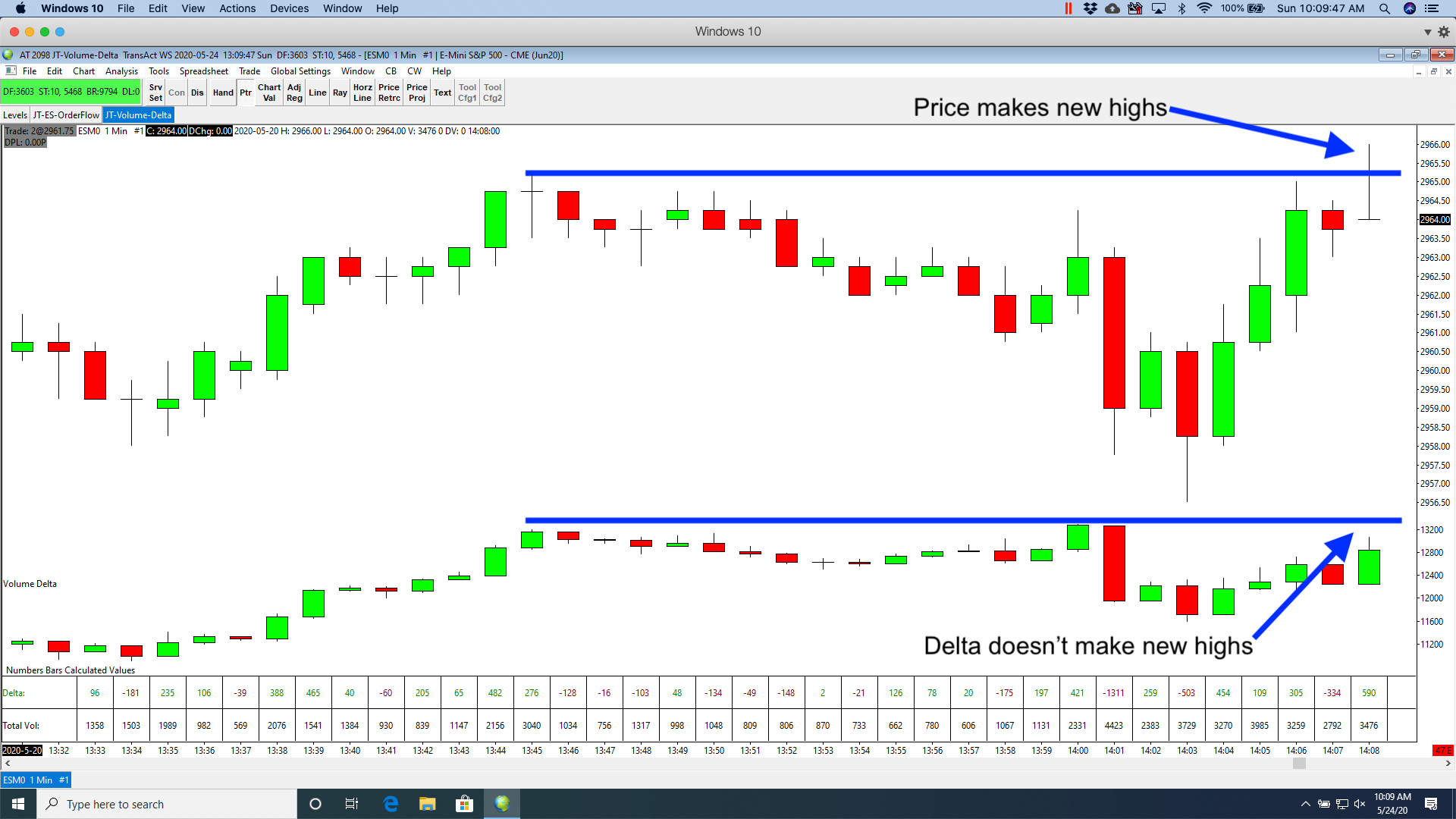 On the above chart notice how price breaks out to new highs but Delta doesn’t follow through.

When this occurs the buyers are said to be “Exhausted” as they aren’t interested in buying at the new highs. 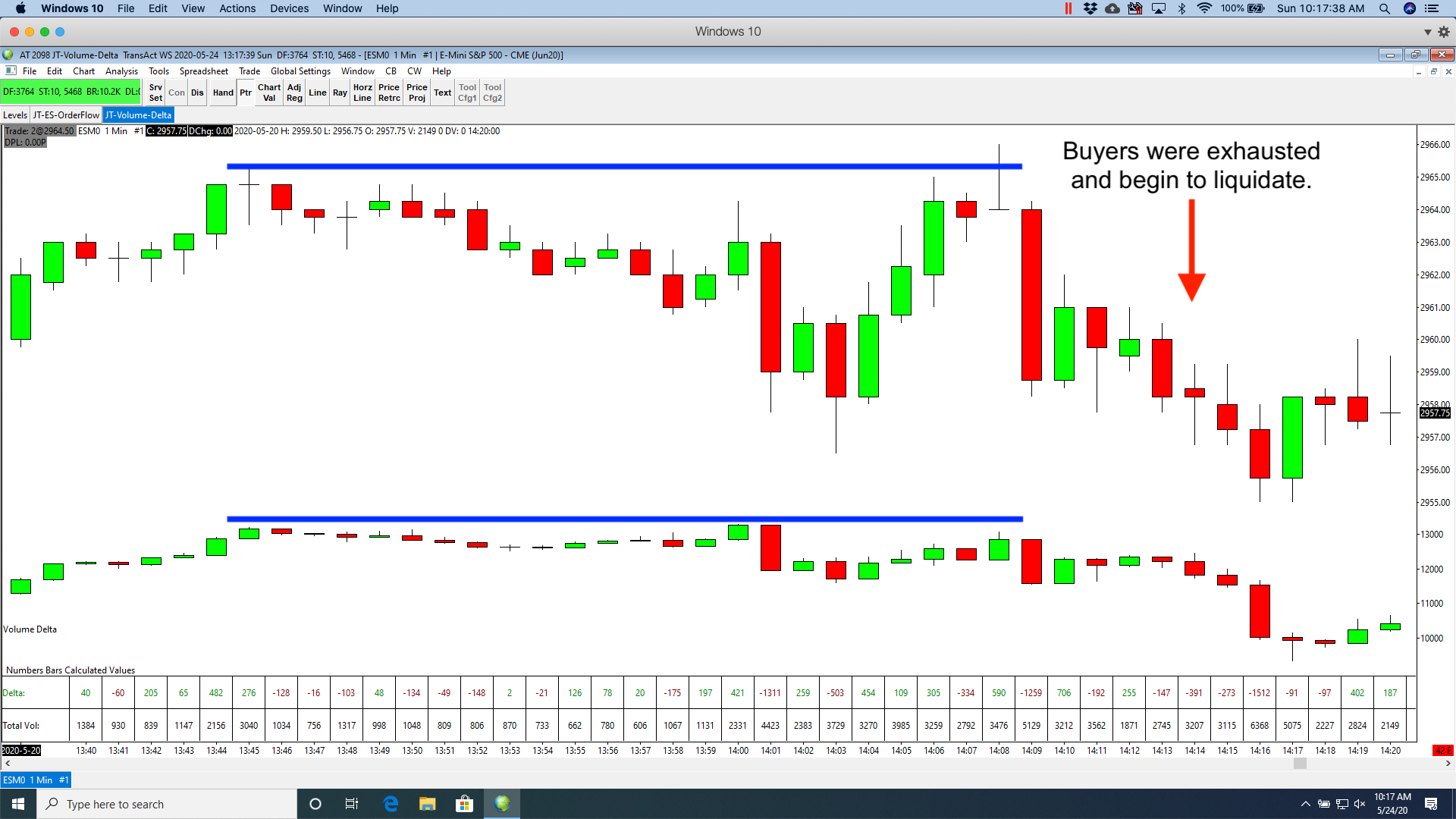 You can see above how the exhausted buyers began to liquidate their positions driving price down.

Let’s take a look at another exhaustion setup. 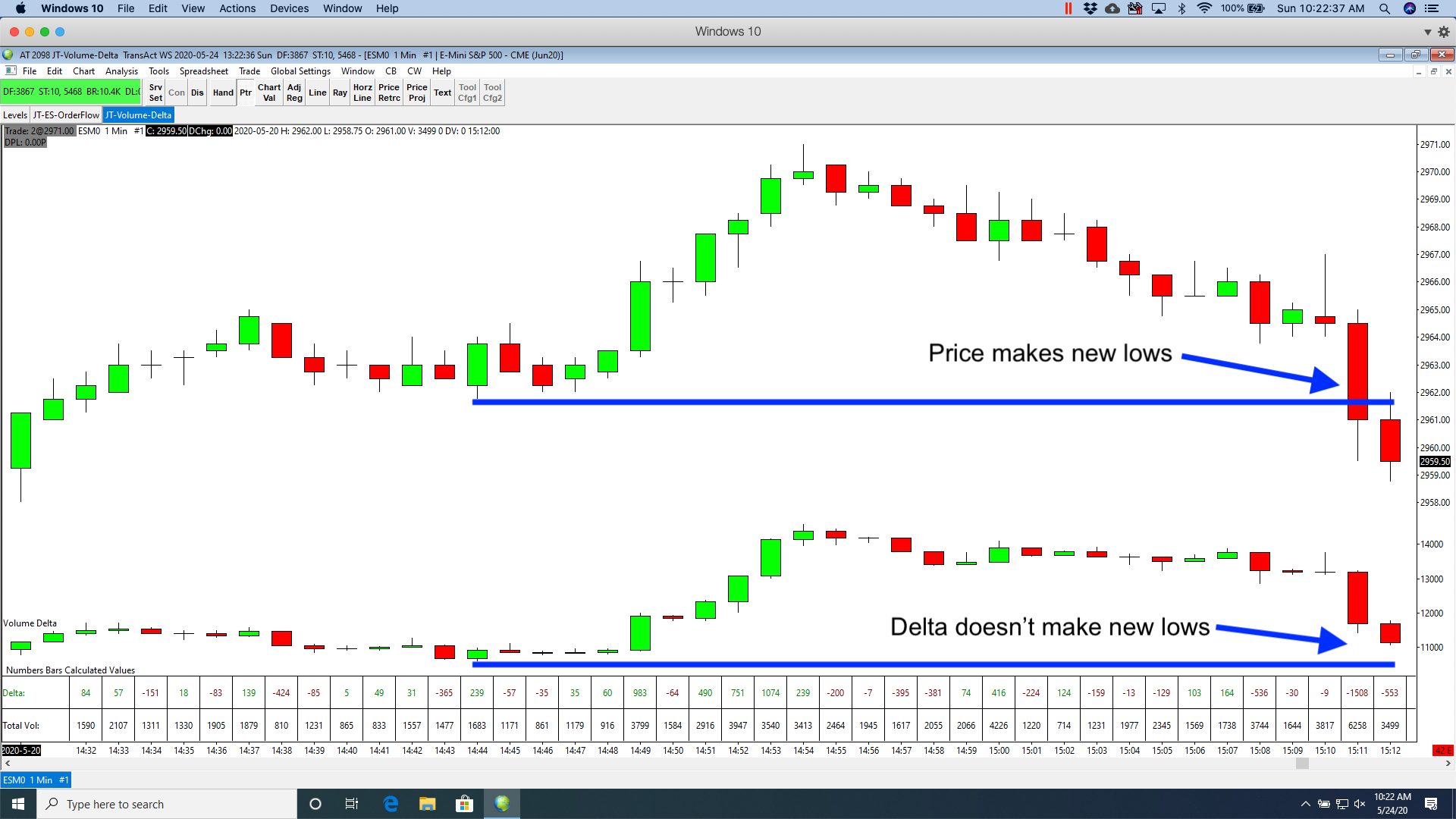 In this example price is now making new lows but delta wasn’t able to. The sellers are now said to be “Exhausted” as they aren’t interested in selling at these new lows. 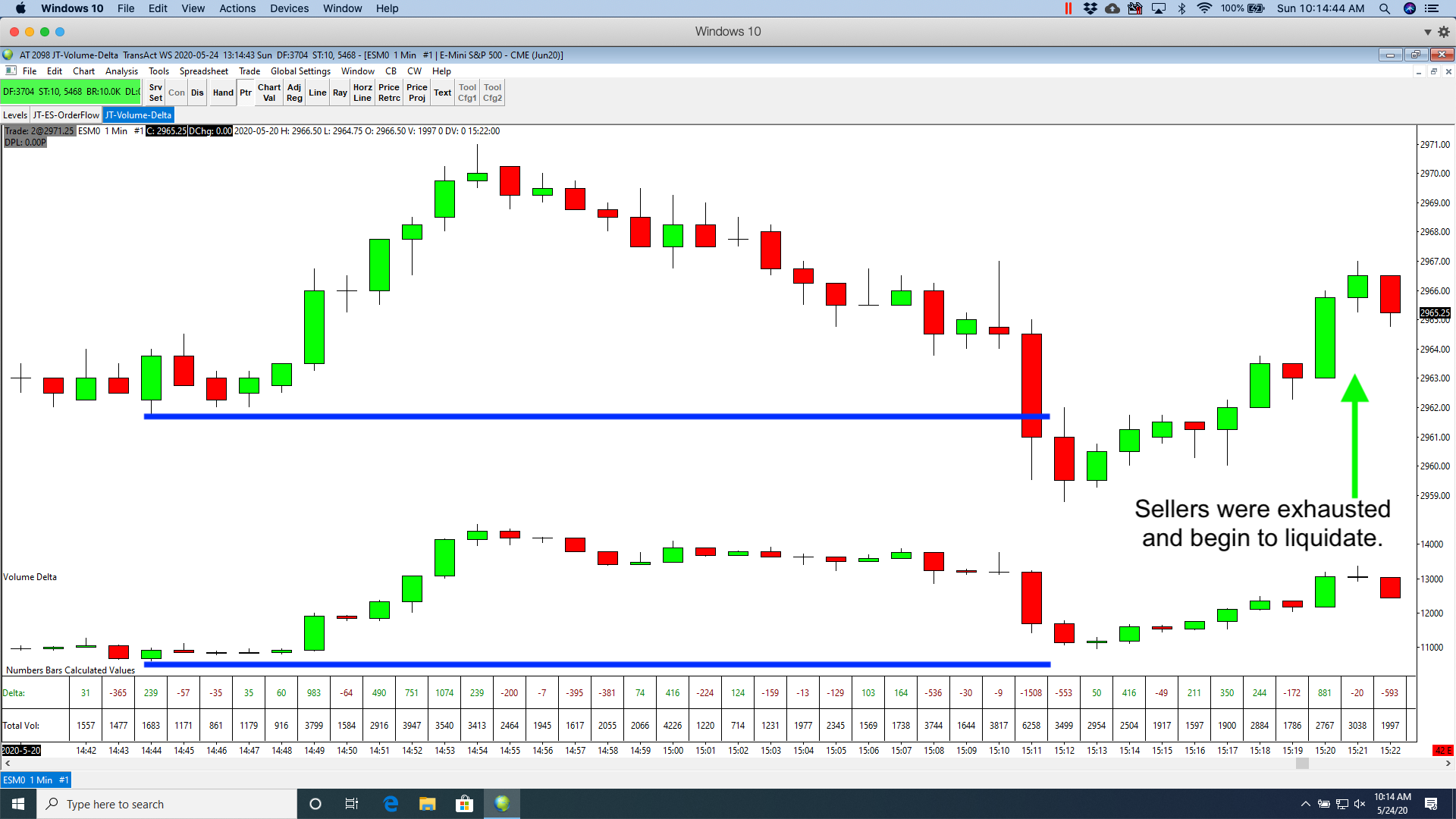 The end result was the exhausted sellers began liquidating their positions driving price up. 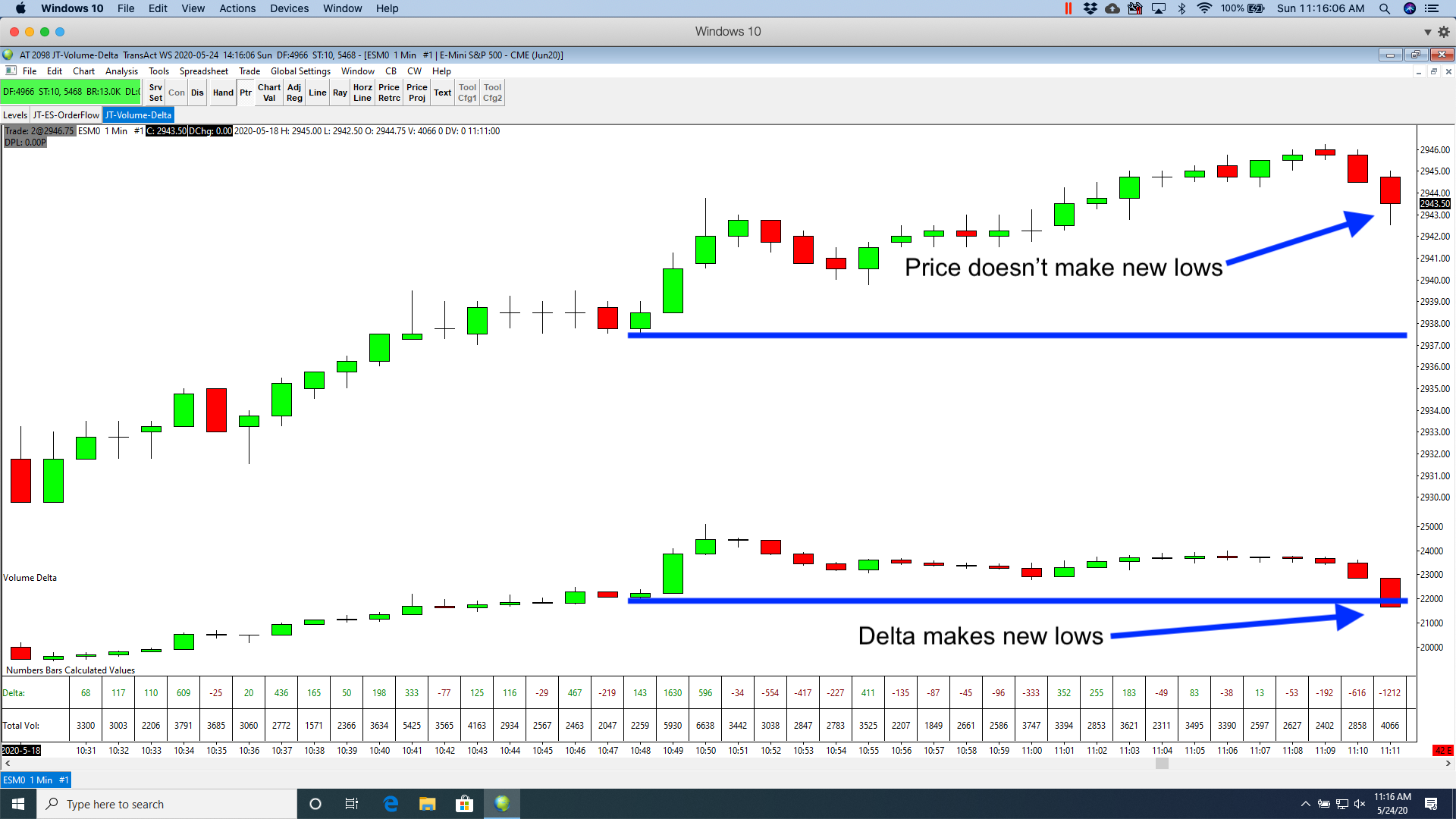 In the above example delta is making new lows but price isn’t following through. Even though there’s aggressive selling pressure, that pressure is being “Absorbed” by the buyers. 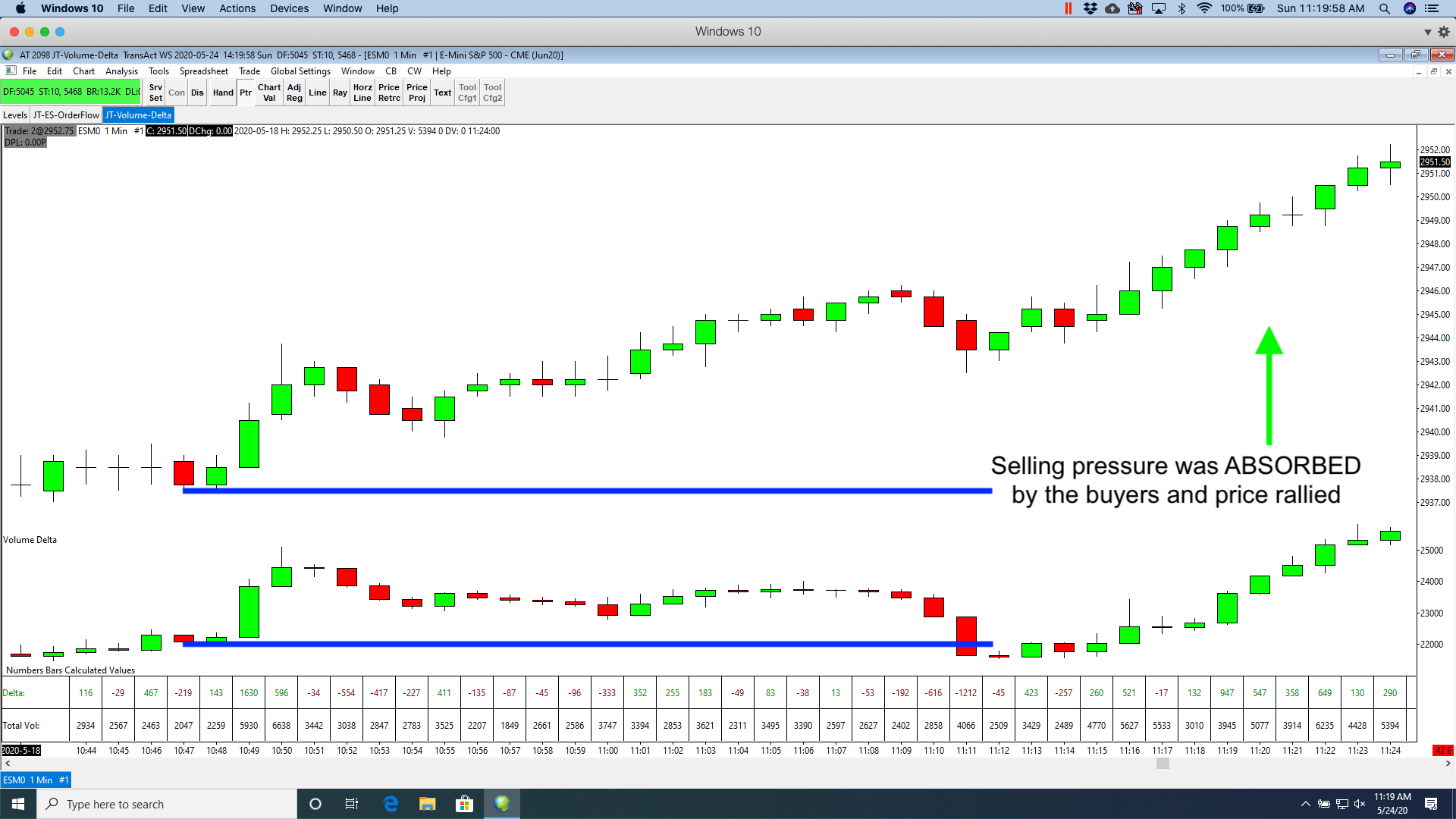 Resulting in a rally as seen above. 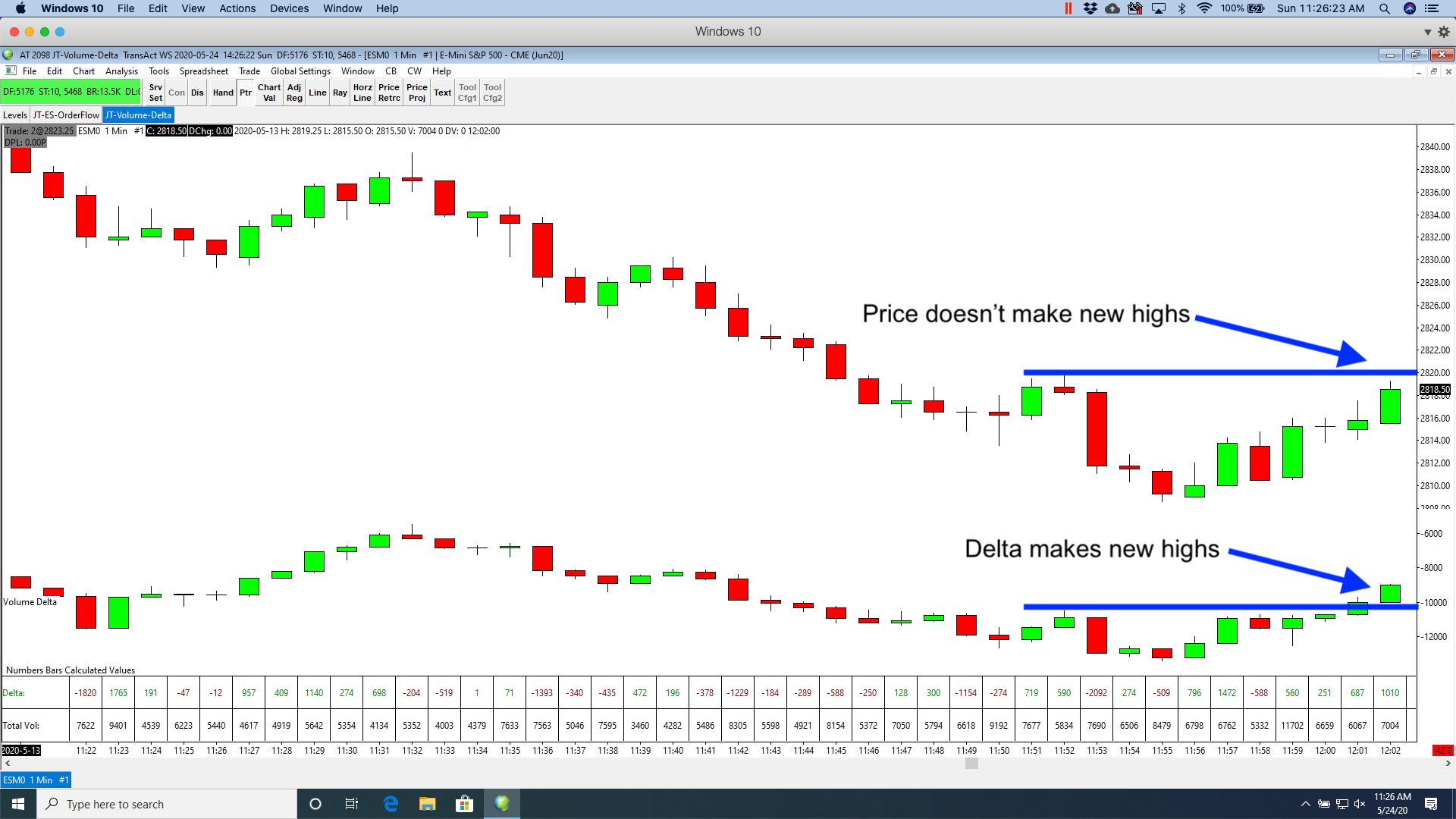 In the next example, delta is making new highs but price doesn’t follow through. Can you guess what’s occurring here? 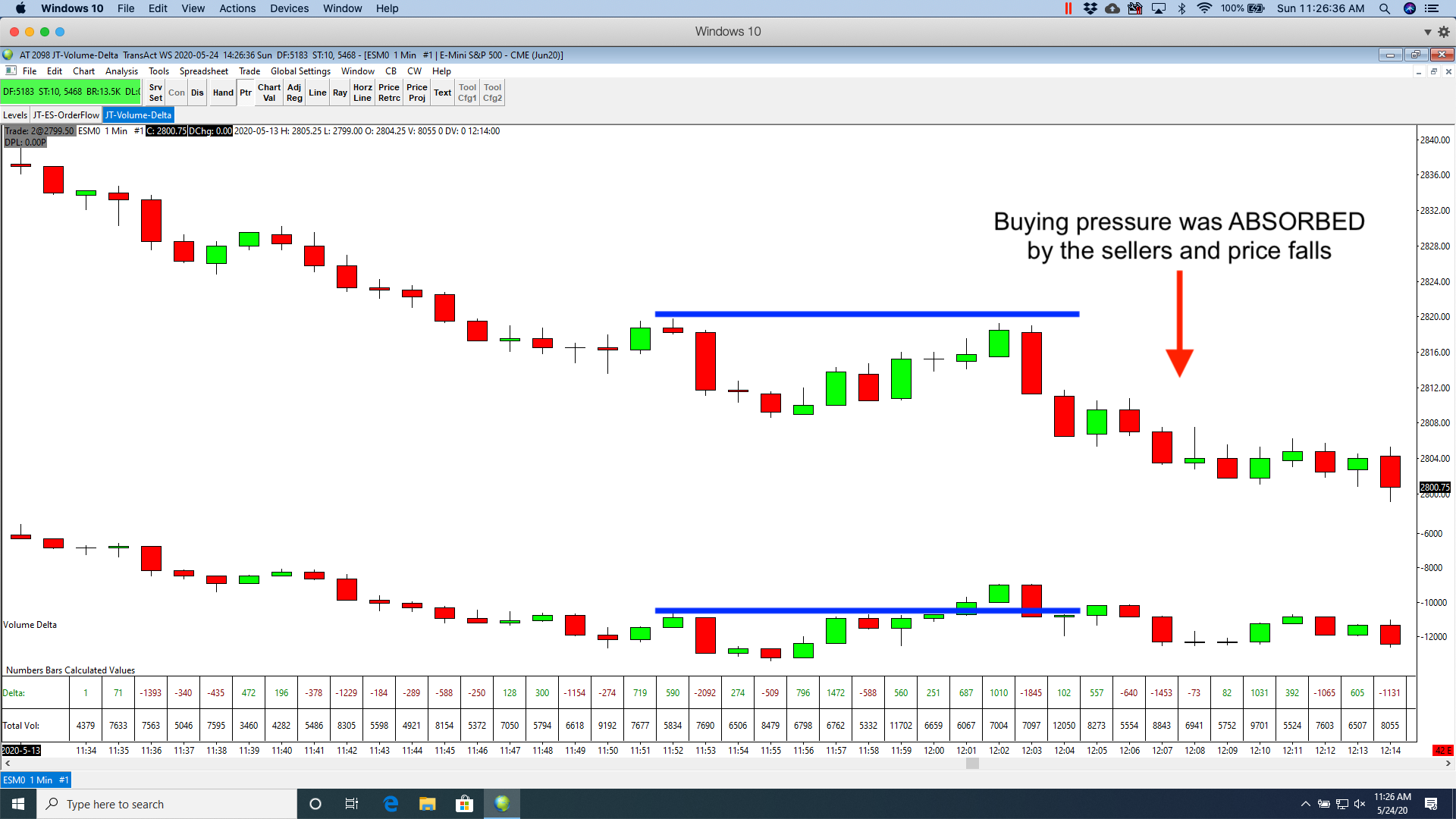 The buying pressure was “Absorbed” by the sellers resulting in a sell off.

Delta not only will help you spot major reversals, but it can be used to help manage your open trades as well. When in a position, whether long or short, you want to see high correlation between delta and price.

If you’re long while price is breaking new highs you want to see delta breaking highs as well. If buyer’s aren’t interested in buying at the new highs, represented by delta not breaking highs, the probability of a reversal increases.

If you’re short while price is breaking new lows you want to see delta breaking lows as well. If sellers aren’t interested in selling at the new lows, represented by delta not breaking lows, the probability of a reversal increases.

When in a position always be on the look out for exhaustion and absorption signaling a potential of a reversal.

NOTE: I’m giving away my chart templates for Sierra Charts and MotiveWave to all JT Insiders. It’s free… SIGN UP

Sierra Charts: Sierra charts has been a rock solid platform for me for nearly 10 years. It still has it’s old and rugged user interface but it just works. Very lightweight system that doesn’t lock up even in high stress data times.

Ninja Trader: Ninja Trader offers a number of order flow indicators including cumulative delta with their free platform. If you’re looking to trade with footprint charts as well you will have to purchase their platform as the free addition doesn’t include footprints.

MT4: You will find some free cumulative delta indicators out there for metatrader but if you’re using them to trade Forex they won’t be accurate. Forex has no centralized exchange so it’s impossible to get accurate order data for volume delta. Your only option if you want to continue to trade currencies would be to switch over to futures.

ThinkorSwim: Doesn’t come standard with cumulative volume delta, but there’s some scripts out there that you can purchase and try.

Cumulative volume delta is one of the best indicators you can include in your arsenal as an order flow trader. It gives you an inside look at buying and selling pressure and how the market is reacting to it.

Try delta with your current strategy or with a few other components and you won’t be disappointed. If you’re interested in delta and order flow trading you definitely should look into footprint charts.

Like any trading indicator or tool it will take screen time to be comfortable with volume delta. So get out there and get testing!

What order flow tools or indicators do you like to trade with? 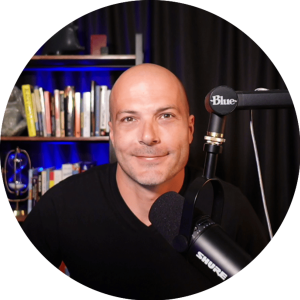 Adam is the founder of Jumpstart Trading. He began his trading career in 2003 as a proprietary equity trader for GPC, which at the time was the second largest prop firm in the United States. While with the firm he achieved top 10 performances and became one of the youngest trainers for the firm. In 2008 he moved on to trade his own capital while developing multiple trading strategies and algorithms. He has quickly become recognized as one of the elite order flow traders in the industry. Today Adam primarily focuses on U.S. Index futures.
Follow @jumpstarttrader

Want to Become a Better Trader?

Get strategic insights from industry experts delivered straight to your inbox. PLUS access templates, guides, tools, & Insider Articles to help you become a better trader.

"These are the same templates, tools, and theory I have used over the past 20 years as a professional trader."